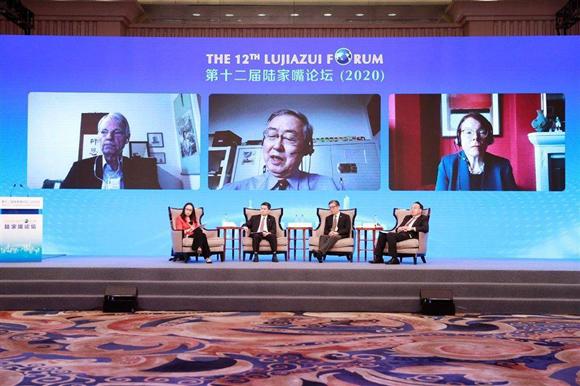 The 12th Lujiazui Forum opened in Shanghai on June 18

Was the Fed kidnapped by the market? How do you see future growth prospects? Will future growth be V-shaped, U-shaped or L-shaped? A. Michael Spence says it's A very uncertain time. He doesn't think central Banks, including the Federal Reserve and the European Central Bank, have been held hostage by the markets, but they are in trouble. A. Michael Spence, meanwhile, is not optimistic about seeing A V-shaped recovery in the future.

As for the current global epidemic situation, A. Michael Spence believes that the situation in developing countries, developed countries and East Asia, including China, is very different. He said that East Asia, including China, has been relatively effective in controlling the epidemic and has acted quickly to restore social order. However, in developed countries, such as Europe and the United States, the response from governments and the system has been slow and the economic contraction is evident, so the impact will be more lasting. Most economies will have to wait until the outbreak is effectively contained before they can begin to recover slowly

A. Michael Spence says his views on the future of the economy have swung between optimism and pessimism. Some problems are not going away anytime soon, and some are even getting worse. In his opinion, there is currently beneficial international cooperation in the fields of science and medicine. There is also room for cooperation in the financial sector. Even if there are some headwinds and signs of fragmentation in the international economy, we can change course and learn from the lessons of the epidemic.

SMiler capacitor also ready to fight the virus or a long time.

Chat Online 编辑模式下无法使用
Chat Online inputting...
We will get back to you ASAP

Hello, please leave your name and email here before chat online so that we won't miss your message and contact you smoothly.